Lessons I learnt from the Brooklyn Bridge. 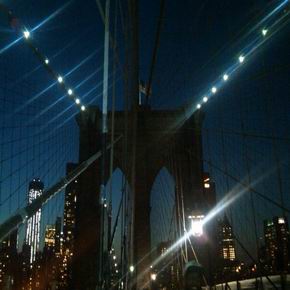 The Brooklyn Bridge was initially designed by German immigrant John Augustus Roebling. While conducting surveys for the bridge project, Roebling sustained a crush injury to his foot when a ferry pinned it against a piling. After amputation of his crushed toes he developed a tetanus infection which left him incapacitated and soon resulted in his death, not long after he had placed his 32-year-old son Washington Roebling in charge of the project.

Washington Roebling also suffered a paralyzing injury as a result of decompression sickness. After Roebling’s debilitating condition left him unable to physically supervise the construction firsthand, his wife Emily Warren Roebling stepped in and provided the critical written link between her husband and the engineers on site.Under her husband’s guidance, Emily had studied higher mathematics, the calculations of catenary curves, the strengths of materials, bridge specifications, and the intricacies of cable construction. She spent the next 11 years assisting Washington Roebling helping to supervise the bridge’s construction.

As an iDEA COACH I work with my clients to execute their BIG ideas, of course we have not built a bridge.  Yet :).  But the point is regardless of the size of a project, there are three factors that they will have in common with the Brooklyn Bridge.

For any BIG iDEA or project to become a reality, it must have a team that believes in its ability to succeed.

Not only does a BIG iDEA need a great team of people, it also needs great advocates, or as we call them these days, your true fans, someone like P.T. Barnum who was undoubtedly the Brooklyn Bridges biggest fan! On May 30, 1883, six days after the opening, a rumor that the Bridge was going to collapse caused a stampede, which was responsible for at least twelve people being crushed and killed. On May 17, 1884, P. T. Barnum helped to squelch doubts about the bridge’s stability—while publicizing his famous circus—when one of his most famous attractions, Jumbo, led a parade of 21 elephants over the Brooklyn Bridge.

You may not have a parade of elephants supporting your idea, plus a loving wife who will learn mathematics from the scratch on her own. I know for a fact if the Brooklyn Bridge was built despite all hard points, you too can follow you big idea and see it becoming a reality JUST REMEMBER it takes time.

I still cry every hour. I can not believe it. 4 ye

I can not stop watching this 😍! Congratulations